A lack of recent posts is due to me becoming sick and tired of the length of time it was taking to organise and post blog entries due to glitches in the blogger software beyond my control.
Therefore, I have created a new blog: http://babbthree.blogspot.com/
Posted by Bill Aspin at Tuesday, June 28, 2011 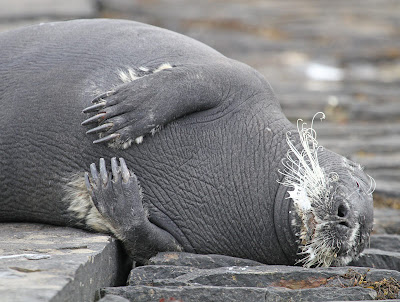 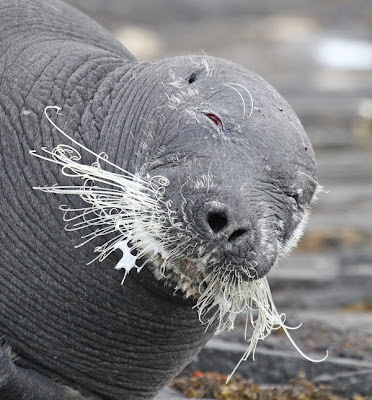 I have put c50hrs of effort in at the local patch during the past week in much anticipated weather conditions of fresh westerly sector winds, with cloud and some rain, resulting in some some excellent wader passage recorded through the site as well as some other nice bonus birds.

Wader totals:
Wood Sandpiper: At least 1 bird. There was a two day gap between sightings. I have video footage of 'both' and intend to grill them to see if I can note any plumage differences.

Sanderling: 19 recorded through during the period, inc a record flock of 8, and a flock of 6. The previous best spring total was 21 birds between 13th May and 5th June 2000. Looks as though, given enough coverage, this total will be broken in spring 2011.

Dunlin: 66 recorded flying east-west through the site. With variable numbers of grounded birds recorded, number is likely to be closer if not exceeding c100. Highest grounded count being 20 on the evening of 18th May.

Grey Plover: A first-summer type evening of 18th May (the only decent bird I failed to connect with).

Whimbrel: Several records totalling c15 birds moving through the site and departing north during the day, contrary to birds dropping in from NE and back out when feeding/roosting in area.

Blue-headed Wagtail: Male on 16th-17th May (see previous blog entry). This would apear to be the first definate record for the site, though there have been 1+ female types thought to be flava in the past. 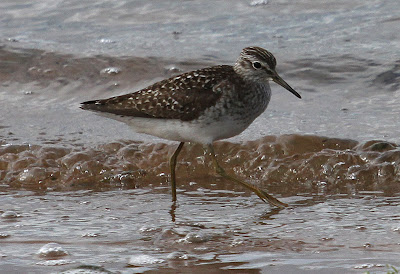 Above & below: Wood Sandpiper - 20th May 2011. Always a great species to record on the patch, particularly in spring, this is one of perhaps two different birds this week. 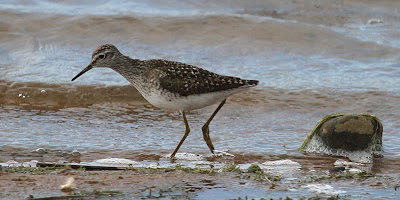 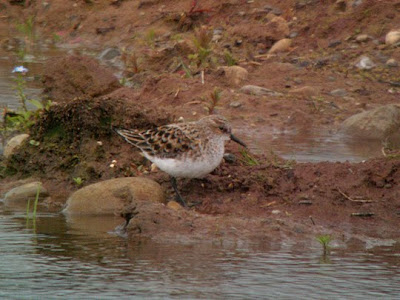 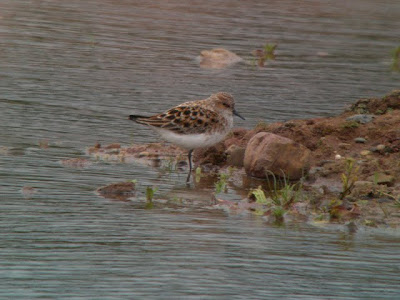 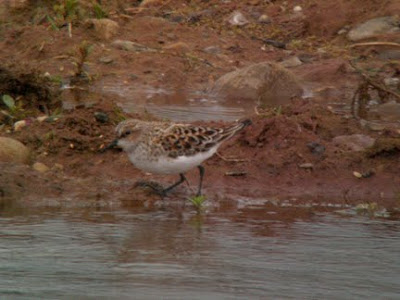 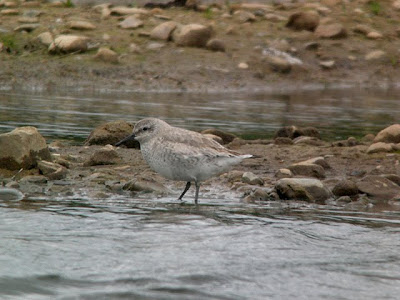 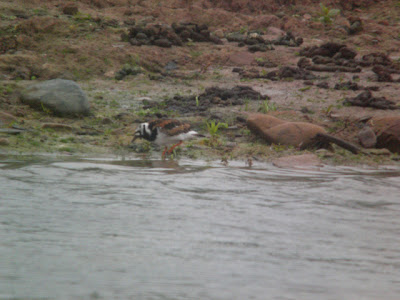 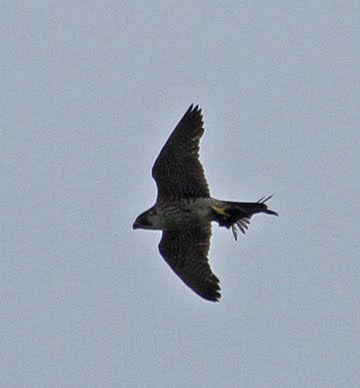 11.5hrs of effort on the local patch in an f4+ westerly and virtually constant heavy drizzle throughout with steadier rainfall thrown in for good measure yielded some good results.

All too quickly, the Osprey continued downriver towards the M6 roadbridge. I slammed the boot shut, cranked up the Chariot and shot down the Reserve access road hitting 50mph in an attempt to head the bird off at the entrance for a record shot. Thankfully no LWT staff were onsite to witness the manic drive/slow me down. 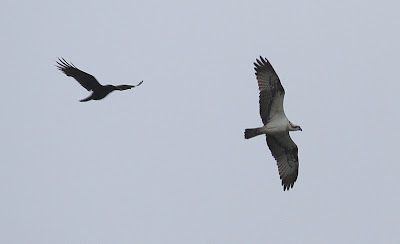 The Osprey stopped just short of the entrance and began to fish briefly before heading back upstream, allowing me time to get the record shot. Time of sighting was 07:10-07:19. What a great start to the session.

The Wood Sandpiper remained from the previous evening, allowing me to improve slightly on the record videograb of the previous night, and was still present when I left the site at 18:20. 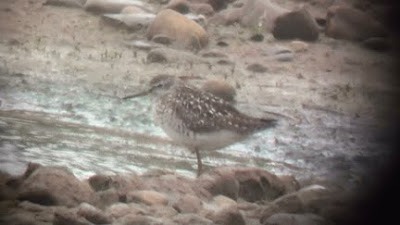 An Arctic Tern appeared briefly on No1 Pit at 08:06, followed by yesterday's poorly seen interesting flava Wagtail which proved to be a male Blue-headed. 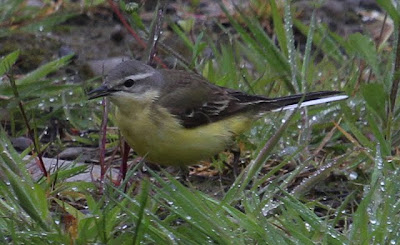 At 09:20, a gargantuan flock of 15 Turnstone dropped into No1 Pit from the east, but only remained for six minutes, 09:20-09:26 and most inconsiderately flew off seconds before I could digiscope them. This flock significantly betters the previous largest flock to be recorded onsite, 9 on 27th May 2000.

At 12:04, following a Coffee in the Visitor Village, a return to No1 Pit revealed 2 grey, 2cy Knot had arrived and were resting on the eastern end of the island. Both flew west at 12:48. A pair of Common Tern briefly circumnavigated No1 Pit at 12:21.

No new arrivals were noted thereafter until a single Sanderling dropped in onto No1 Pit at 15:27, and a single Whimbrel on Meadow Lake at 18:28. I did have two sightings of a Hobby during the day.

Following my departure home at 18:30, Nick Green arrived onsite to continue observations and was rewarded with a flock of 11 Dunlin 'in' onto No1 Pit and also a second Sanderling. At least 18 Dunlin and 10+ Ringed Plover were onsite mid-evening. An excellent day on the patch.
Posted by Bill Aspin at Monday, May 16, 2011 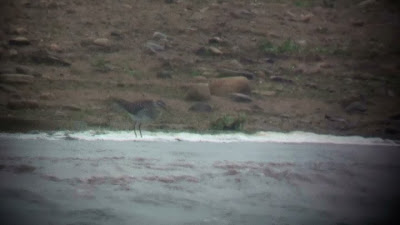 The f4 westerlies with cloud and rain produced some nice birds on the local patch today with the first Turnstone of the spring (2 birds) seen in the morning and a splendid Wood Sandpiper (above) early evening in foul weather which eventually resulted in 'rained-up' optics. Also, a Flava Wagtail was seen very briefly in the evening was thought most likely to be Blue-headed, but not confirmed.
Posted by Bill Aspin at Sunday, May 15, 2011

An absolutely brilliant 'Gropper' on the local patch. 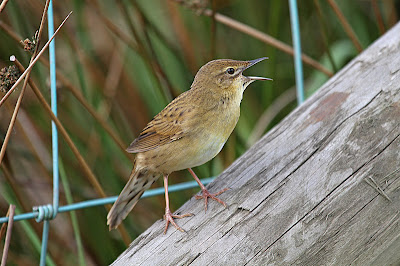 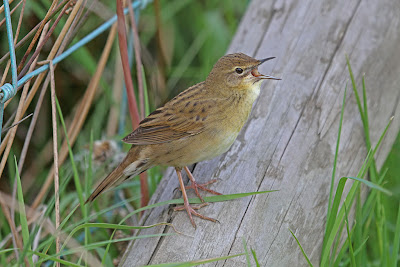 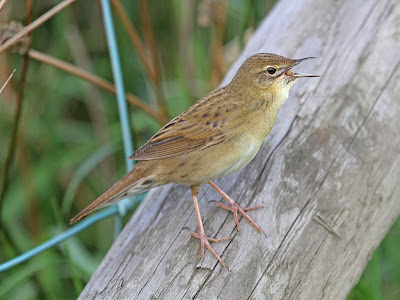 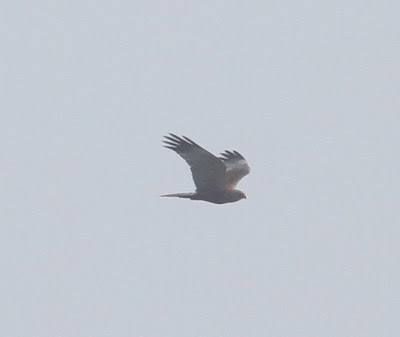 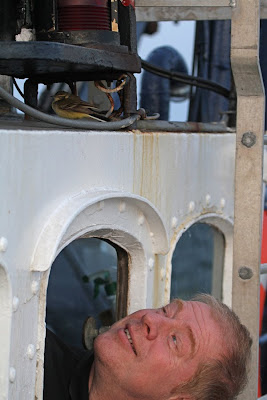 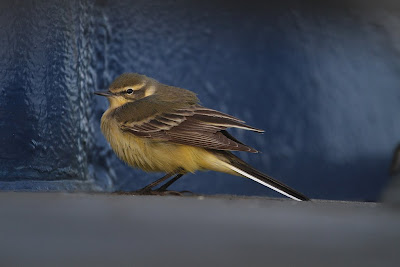 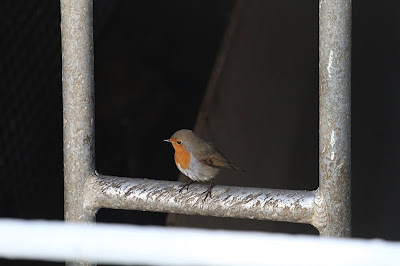 Above & below: 'Continental' Robin - 20 miles offshore. At 11:32AM this bird took off high NE, next stop Scandinavia. The best Robin I ever did see! 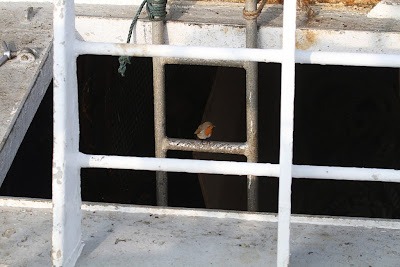